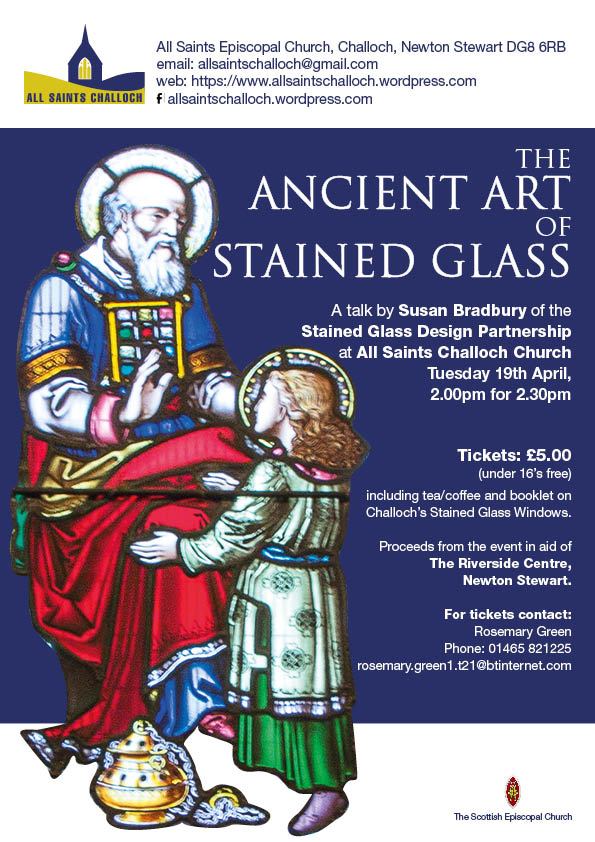 The Ancient Art of Stained Glass

Visitors to All Saints Episcopal Church at Challoch are often struck by the beauty of its ten stained glass windows. Now they will have a chance to hear about the history and making of these wonderful artefacts from an acknowledged expert in her field.

Susan Bradbury, works at the Stained Design Glass Partnership, Kilmaurs, Ayrshire, and she will be giving a presentation on this fascinating ancient craft on Tuesday, April 19th at the church.

The Partnership has undertaken many conservation projects in Scotland and England for all sorts of buildings including homes, schools and libraries as well as chapels, churches and synagogues. Interesting examples are a window larger than a tennis court for Norwich Union Insurance, and the Burns memorial window in Alloway Auld Kirk.

The windows at All Saints are the work of two eminent stained glass artists, Charles Eamer Kempe and Charles Alexander Gibbs.

The triple west window is by Kempe (1837-1907) whose maker’s mark was the wheatsheaf.  His studios produced over 4,000 windows and also designs for altars and altar frontals, furniture and furnishings, lychgates and memorials. Examples of his work can be seen at 58 sites in Scotland, including St. Mary’s Cathedral, Edinburgh, Girvan Old Parish Church and All Saints Challoch –  as well as Chester, Gloucester, Hereford, Lichfield, Winchester and York cathedrals in England.

Charles Alexander Gibbs (1825-72)  was one of three sons of Isaac Alexander Gibbs who became stained glass designers. The family firm was established in about 1848 but split when Charles Gibbs set up his own works at 148 Marylebone Road, London in 1858. His most elaborate surviving works can be seen in the east window at St. Mary’s Church, Bideford and All Saints, Margaret Street.

The use of stained glass in churches stems from medieval times originally when the large majority of the population were illiterate.  They were a way of telling bible stories and depicting saints, in vivid colours.

In the mid 1800’s there was a revival of Gothic architecture, when many new churches and cathedrals were built and older ones restored leading to a revival of stained glass techniques

Susan Bradbury’s talk “The Ancient Craft of Stained Glass’ will take place at 2.00 for 2.30pm on Tuesday, 19th April. Tickets cost £5 (children under 16 free), and include a tea/coffee and a booklet about All Saints stained glass. Tickets are limited so to reserve a place, please contact Rosemary Green rosemary.green1.t21@btinternet.com or Telephone: 01465 821225

Proceeds from the event will be donated to the Riverside Centre in Newton Stewart.

The event is finished.